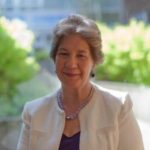 We’re starting our reflections with Gill Raikes MBE, Chief Executive Royal Brompton and Harefield Hospitals and former Fundraising Director, The National Trust. Take a look at her thoughts on the past 50 years of fundraising:

I can reflect on 50 years of fundraising because my first experience of fundraising was at a very young age – when my father was on the fundraising committee for Enterprise Neptune – The National Trust’s flagship campaign to save beautiful and threatened parts of the coastline of Britain. Then, my job was to lick the stamps which went on envelopes to ask people to support the appeal. Stamps now have adhesive backs, but there have been a great many other changes too.

We didn’t call such network fundraising ‘direct mail’ in those days – we called it ‘writing to friends’. Luckily for me, direct mail really reached its peak as I started fundraising in the late 1980s, and for the next two decades it was a pivotal and valuable fundraising method.

It is no longer a mainstay of fundraising, having been tarnished by overuse, and by commercial paper overload pushing everything from loans to pizzas.

Now fundraising is much more finely tuned to be about listening to what donors want and need.  The biggest and best change is that donors have the chance to get more engaged with the causes they support. This gives pleasure to both donor and fundraiser. It has inspired millions of people to embark on sponsored challenges, companies and employees to get involved in fundraising and families to set up their own charitable trust or foundation.

Gill has been the Chief Executive of Royal Brompton and Harefield Hospitals for over five years. This is a newly independent charity, though its sole aim is to raise funds to support these two remarkable specialist hospitals. Prior to this, Gill was the Fundraising Director at The National Trust for 28 years.