For the last few years it’s felt like the sector is almost at war with the Charity Commission over their plans to introduce fees for regulation. Their weapon of mass distraction has been the Chair, William Shawcross, typically during interviews with the press, highlighting their intention to do it very soon.  But thus far their weapon has lacked the warhead and the bomb has not gone off.

The latest shot across the bows is announcement at the Charity Commission’s annual public meeting that a consultation would be out by the end of January, which ended yesterday. So it looks as if it’s battle stations as we go to CHTYCOMM 4.

It’s not the Commission’s fault. Like most budgets provided by central government these days, theirs has been the victim of repeated slashing. £40m hacked away down to £21m to give you an idea of the severity. So charging charities fees isn’t so much a grand strategy,   rather it’s an act of desperation.

Why is it a bad idea?

I’ll spare you a recap of the multitude of arguments against it which have already been made by DSC in this paper and also by Charity Finance Group. Let’s focus on the logic of the proposal. It seems that charging charities fees for regulation is not in the Commission’s interest, never mind charities: 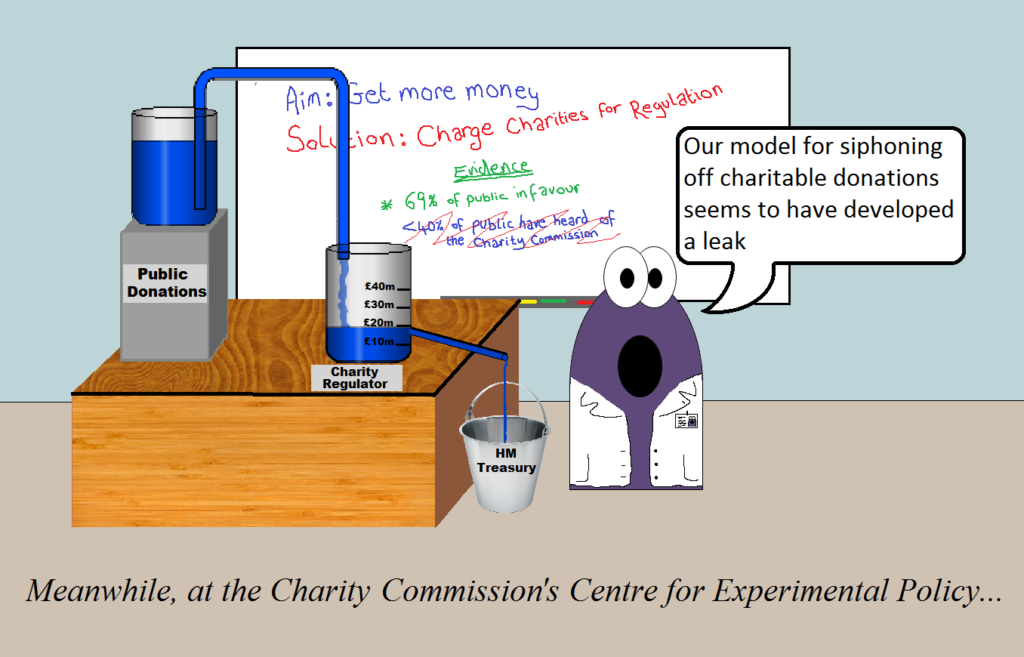 The Commission’s arguments so far have featured number of angles:

Simple.  The government is not doing charities a favour by footing the bill of the regulator. Charities save the taxpayer billions of pounds every year and make up for so many of the State’s failings, making it appear better than it actually is. There’s not a single person in the country who has not, is not, or will benefit from the work of a charity and it’s not asking for a lot for the Treasury to continue funding the regulator- it’s a sound investment.

But why is the Minister for Civil Society, Rob Wilson, not standing up for the Commission? If he is he’s keeping very quiet about it. Why is he seemingly allowing his area of responsibility to be so rightly done-over without challenging it?

We must loudly make the case to Mr. Wilson, the government, the Treasury, the public, anybody who will listen (or won’t), that State funding of the Charity Commission is hugely advantageous. You can start by signing and sending this letter. But you can tweet, email, shout, sing, draw, picket, protest, do whatever it takes to make the point loud and abundantly clear.

For the love of people and animals in need, for the sake of the lonely, the broken, the vulnerable, the poor and for the values of charitable giving – do not let the Treasury force the Charity Commission down this route.