There is not a single human being in the UK, regardless of their age, economic status or background, who will not at some point in their lives have benefited from the work of a charity or voluntary group.

Everybody relies on charities and voluntary groups, regardless of social or economic background, often without even realising. Charities make the world around us a better place and really do save lives. It doesn’t matter if you have interacted with a charity directly or indirectly, everybody benefits from the existence of charities.

Why are we highlighting this campaign again now?

Attention at the moment is, understandably on the charities working directly to address the impact of COVID-19. Charities like St John’s Ambulance and Royal Voluntary Service are a critical part of helping all of us through this situation. But there are tens of thousands of other charities providing critical help and support to millions of people, and they are really struggling right now.

We’ve gathered data and stories about the new challenges many charities are facing, and we’ve pushed government tirelessly for a £4.2billion stabilisation fund – the likely financial impact of COVID-19 on the charity sector. £750m has been promised by the chancellor, but it’s nowhere near enough.

#EverybodyBenefits is about showing government, journalists, funders, and everybody else, that charities are everywhere. It’s about helping them to see that there’s a pretty good chance that the PTA at their kids’ school, the support group they’re directed to by their GP, the woodland where they walk their dog, the hospice looking after their grandparent and their local sports club are all charities.

So what we’re asking people to do, is take to social media, and tell the world about the amazing work the charities you know are doing. Whether you’re a staff member, volunteer, trustee, supporter or some who benefits directly from the work of a charity, tell us how amazing they are, the difference they make to people’s lives, and we’ll help to spread the message far and wide that #EverybodyBenefits from the work of charities – and they need even more support if they’re going to survive and be part of helping all of us when the current crisis is over. 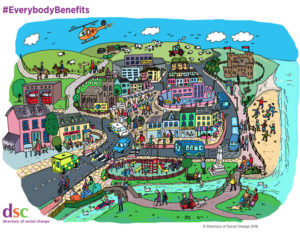 That’s a cool cartoon! Why is it important?

DSC’s #EverybodyBenefits cartoon highlights a town in the UK, it could be any town. You can see that it is full of people going about their normal routines. Tens of thousands of charities and voluntary organisations are at work in this town, just like they are in every town. Without them, a lot of what you see would stop happening. For example, the river is clean because of charities like the Canal and River Trust, historical buildings are preserved because of organisations like the National Trust. The roads are safer for pedestrians and school children because of charities like BRAKE. People are mentally and physically healthier because of charities and voluntary groups like Samaritans. The list really is endless.

This cartoon is a fun and engaging way to get people to think about charities as a key aspect of their society – which we’ve turned into a game! How many charities can you see? The object of the game is to identify as many charities and voluntary groups as you can, by looking at all the things going on in the picture.