What is the purpose of the report?

Although only a relatively small percentage of ex-Service personnel come into contact with the criminal justice system, armed forces charities provide a wide variety of support for those who do.

This Focus On report intends to provide, for the first time, a comprehensive overview of the support delivered by armed forces charities for members of the armed forces community who come into contact with the criminal justice system.

What does it cover?

In this report, we use the phrase ‘criminal justice support’ to define any activity which helps members of the armed forces community who have been in contact with the criminal justice system.

The report aims to provide the reader with:

Who is it for?

This is a unique resource for charities, practitioners, government, policymakers and researchers to understand what armed forces charities do to support members of the armed forces community in the criminal justice system.

What did we find?

What did people say?

Air Vice-Marshal Ray Lock CBE, Chief Executive, Forces in Mind Trust: ‘For anyone claiming to hold dear the interests of the Armed Forces community, be they politician, official, media or charity, the DSC’s Focus On series is a must read.  This particular report provides the evidence base and hence understanding of the Criminal Justice System, upon which all good policy decisions should be made.’

Chloe Mackay, Co-Chair, Cobseo Veterans in the Criminal Justice System Cluster (from the Foreword): ‘Having the support of a charity that knows what they have been through and takes an interest in them can give veterans the strength they need to turn their lives around. I welcome this report, which provides insight into the delivery of support to veterans in the Criminal Justice System.’ 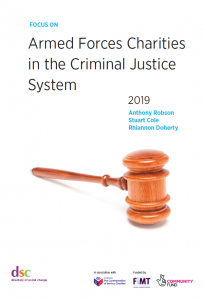 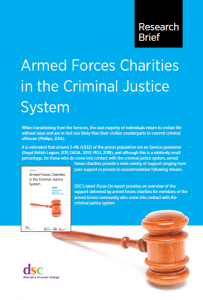 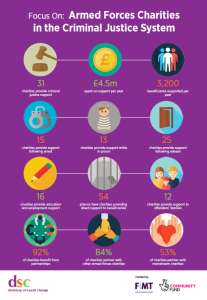 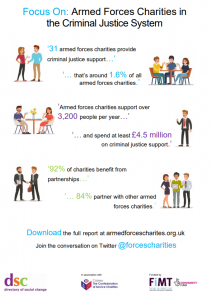