The report highlights financial trends and patterns in opening, closing and merging charities, along with an overview of how many armed forces charities are currently operating.

New research from Directory of Social Change (DSC) and funded by the Forces in Mind Trust (FiMT), shows the Armed Forces charity sector is shrinking, with Scottish charities and local association branches most affected.

There are currently 1,888 Armed Forces charities in the UK. This is a relatively small number compared to other charity subsectors, such as health, which is estimated to include 6,500 charities, and education, 7,650 charities.

Since 2012, 65 Armed Forces charities have closed, with Scottish charities closing at double the rate of those opening2. While there are still 633 membership association branches in the UK, which offer social and comradeship activities, there are now 152 fewer branches than in 2012.

DSC found a high turnover of Armed Forces welfare charities opening and closing over the past six years, with close to a third of these charities having an operational lifespan of less than ten years. In total, welfare charities account for approximately two-thirds of all sector income.

Air Vice-Marshal Ray Lock CBE, Chief Executive, FiMT:
‘This latest report in the Focus On series is a must read for those making decisions about resources, how they can be generated and where they are best deployed, as well as for those who commentate responsibly about the sector. The UK’s Veterans Strategy draws heavily on DSC’s work, and rightly so. It is authoritative and illuminating: rare, but invaluable, qualities.’

Lieutenant General Richard Nugee CVO, CBE, Chief of Defence People, Ministry of Defence:
‘The need for policy makers and service providers to consider the armed forces community from an evidence-based position and with a proper understanding, features as one of the five cross-cutting factors in our veterans strategy. This report makes a helpful and significant contribution to this evidence base by increasing our understanding of the armed forces charity sector.’ 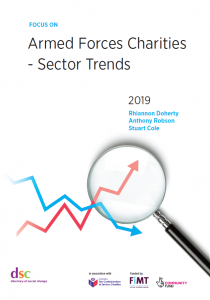 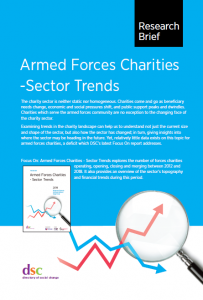 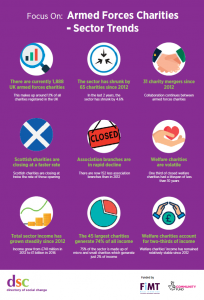 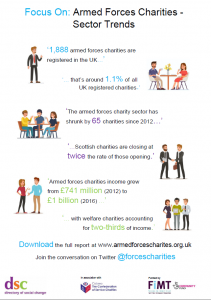