New research published today by the Directory of Social Change (DSC) shows that armed forces charities provided at least 89,000 people with a range of family-related support in the year prior to August 2020, spending at least £68.5 million on services those families rely on.

Focus On: Armed Forces Charities Support forFamilies, which was funded by Forces in Mind 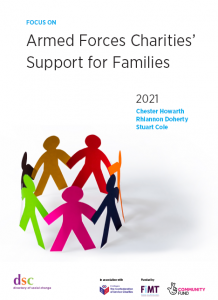 Trust (FiMT), investigates the extent and characteristics of the sector’s support for armed forces families.

The report finds that armed forces charities’ support for families is varied. Those surveyed by DSC, typically support beneficiaries through social groups (44%), with mental health (42%), education (41%), or finances (38%). It was also common among charities to provide these types of support to spouses and/or partners, but education support was mostly provided to children.

Researches found that family members supported by armed forces charities were more likely to be part of the ex-Service than the serving community. Whilst almost two-thirds (62%) of charities support both serving and ex-Service families, those supporting one of the beneficiary groups exclusively were almost three times as likely to support ex-Service families.

The report shows that, in delivering support to families, 71% of survey respondents collaborate with charities within and outside the sector, alongside a range of other organisations such as the Ministry of Defence (MOD), Armed Forces Covenant signatories and NHS services.

Over one-third (37%) of charities surveyed identifying beneficiaries as a practical challenge in delivering support to armed forces families. The report calls for the sector to work together and gather more data to strengthen approaches to referring, searching for, and raising awareness among beneficiaries – this is pivotal to ensuring beneficiaries receive the support they need, at the time they need it.

Commenting on the launch of the report today, DSC Researcher and lead author, Chester Howarth said: ‘Families are a large part of the armed forces community and can face unique challenges, such as greater mobility and periods of separation. This new Focus On report provides an overview of the types of support for families, how it is delivered, and to which beneficiaries. Importantly, it highlights the need to mitigate challenges in identifying beneficiaries and measuring impact in order to maximise the beneficial outcomes of charities’ support.’

Collette Musgrave, Chief Executive, Armed Families Federation said:“The three Families Federation welcome this report and its focus on the assistance that armed forces charities provide to families. We are grateful to the Directory of Social Change and Forces in Mind Trust for highlighting the challenges that our armed forces families face, the sacrifices they make and their need for effective support.”

About the Directory of Social Change (DSC):

DSC is the leading provider of information and training for the voluntary sector and publishes an extensive range of guides and handbooks covering subjects such as fundraising, management, communication, finance and law. Since 2014, DSC has worked with the Forces in Mind Trust to research and analyse the armed forces charities sector in the UK and has become the foremost expert in this field.

Forces in Mind Trust was founded in November 2011 by a £35 million endowment from the Big Lottery Fund (now The National Lottery Community Fund). As a member of Cobseo – the Confederation of Service Charities and a permanent member of its Executive Committee, the Trust works within the Armed Forces charities sector, and much more widely, to support the UK’s Armed Forces Community.

The mission of FiMT is to enable ex-Service personnel and their families to make a successful and sustainable transition to civilian life. FiMT delivers this mission by generating an evidence base that influences and underpins policy making and service delivery, and by strengthening the Armed Forces charities sector through collaboration and leadership, and by building its capacity.

FiMT’s grants and commissions are designed to generate sustained change that improves the lives of ex-Service personnel and their families. FiMT awards grants to support its Change Model based on six outcomes: Housing; Employment; Health; Finance; Criminal Justice System and Relationships.