As controller of the country’s purse strings, we learned only in late August that Javid would present an interim ‘Spending Review’ prior to Parliament being dismissed (prorogued) until mid-October. We should have been having this exercise throughout 2019, to set the government spending menu for years into the future. But as with so much else, Brexit devoured those plans – meaning government departments, agencies and local councils have had little certainty about their finances beyond 2020. The interim review was billed as stemming the financial hunger of austerity and setting the table for a potential General Election in the coming months.

And then, on the eve of Javid’s opening day, the new PM proceeded to not just lose his new Government’s wafer-thin majority on just his second day in front of the Commons, but to comprehensively flambé the whole kitchen with a flamethrower by removing the whip from 21 Tory MPs (among them two previous Chancellors, a host of ex-Ministers, and Winston Churchill’s grandson).

The reason? A cross-party coalition of MPs succeeded in gaining leverage over the new Government by taking control of business in the House and debating a bill that seeks to rule out a ‘no-deal’ Brexit scenario. 21 Tories voted against the government, and were summarily expelled from the party. The sight of Jacob Rees-Mogg MP, now Leader of the House – a man who voted against Theresa May’s government repeatedly – sprawled on the front bench as if he’d had too many bowls full was an irony not lost on many.

Against the current constitutional dog’s breakfast it’s important to remember that increasingly, government’s big financial announcements seem more like a mouthful of cotton floss – lots of spun sugar which soon dissolves into not very much. Would Javid’s pudding actually ‘end austerity’ or even contain any succulent morsels for charities? 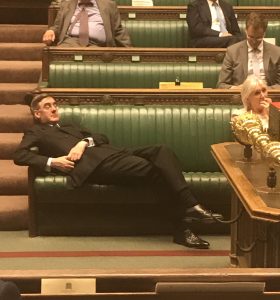 After he got through a long-winded introductory party-political wheeze, the Chancellor did announce some chunky bits that charities will want to chew over, although there was nothing particularly strategic or ground-breaking.

He claimed that next year would see a rise of over £13 billion in spending, with most of the measures focussed on police, health and schools, as part of his party’s core appeal to the electorate. Some of the highlights were:

Whether any of these decisions will satisfy the respective level of need seems unlikely – especially in the case of social care (Boris Johnson made vague statements in the summer about fixing the system but further details haven’t emerged). Even if budgets are increased with inflation or above, this doesn’t necessarily mean spending will keep up with rising demand on services – which charities see happening every day. Also, if there is an election soon which produces a different government, it could all be just so much wasted paper, or at best a stop-gap plan.

There were a few specific announcements which people in charity sector will want to pay particular attention to:

Left out of the recipe

There were some obvious missing ingredients in the Chancellor’s pudding in addition to the lack of any policy movement on social care. In particular, two issues which have most come to define the experience of austerity over the past ten years: benefits cuts and slashed local government budgets. On both, Javid offered a kind of fudgy obfuscation.

All in all, considering the chaos in the rest of the kitchen it wasn’t the worst announcement from a Chancellor we’ve seen recently (which isn’t saying much). But given the increasing possibly of a snap General Election and a new government, we could be back to the chopping board soon….

You can find the full details of Spending Review 2019 here:

Also, don’t miss what DSC and other leading charities called for in advance of the Chancellor’s statement here: