In May 2020 we asked charities whether they had accessed various sources of financial support during the COVID19 pandemic, including several schemes introduced by the UK Government to support businesses which charities are eligible for.

Over half of those that replied had taken advantage of the government’s job retention scheme, where staff are furloughed in order to hopefully survive the crisis or stave off closure at short notice.

This evidence corroborates findings from other similar surveys – that to date the job retention scheme appears to be the main source of support keeping much of the charity sector in the UK afloat. However, it clearly isn’t designed for charities or the voluntary sector’s economy, because it results in mission-critical staff being put on leave rather than maintaining vital services. Calls to allow furloughed charity staff to volunteer back for their employer to keep services going have been flatly rejected by the Government.

The Government has made billions in loan finance available too, which charities are able to access, but on this evidence hardly any are doing so. Either they think it isn’t right for them or they’re being rejected. It’s not surprising that trustees are reluctant to take on finance when they have no idea when fundraising and other funding streams might recover.

The key findings of the survey are: 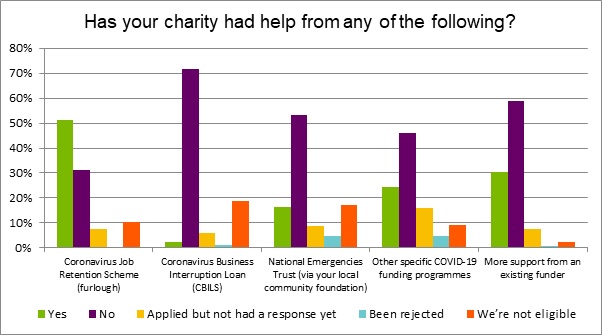 It’s just not good enough that the main support charities are accessing depends on them furloughing staff and stopping the activities that support their beneficiaries, communities and causes.

DSC will be using the findings from this survey as further evidence to press the government and other influencers to make the case for more and better support for the sector as part of the #NeverMoreNeeded campaign. Thanks to all who took the time to respond!