In February 2015, DSC responded to the Charity Commission’s consultation on the new draft of its guidance to charity trustees: “The Essential Trustee” (CC3). In our response argued that, while the draft has made some progress in clarifying the duties of trustees, the tone was completely wrong and risks turning people away from trusteeship. The draft was overly prescriptive in some places and fails to make the connection between poor charity governance and the real consequences for charity beneficiaries.

We worked closely with the Commission on this and are pleased to say that the final version released in July 2015, which can be found here,  is a marked improvement. We commended the Commission publicly for the efforts the commission made consult the sector in preparing this important document.

We made two consultation submissions on CC3, on the first draft in February 2015, and then on the revised draft in June 2015. Click the title pages below to read our full responses 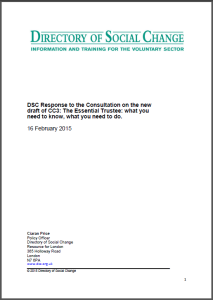 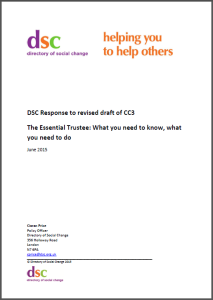