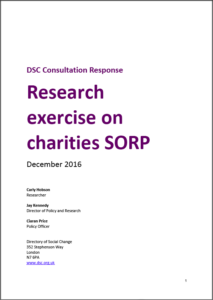 Statements of Recommended Practice (SORPs) provide recommendations for comprehensive accounting and reporting. The Charities SORP is an important document as it can help charities in the preparation of its annual report and accounts.

The Charity Commission and the Office of the Scottish Charity Regulator, now the joint SORP-making body for charities, launched a research exercise on five specific areas of the SORP to identify areas in need of changing in anticipation of a new SORP in 2018.

Jay Kennedy, Director of Policy and Research said ‘charities clearly should be held to high standards of transparency, not just because it’s in the public interest, but so that the origin of the support they receive to help people is clear. Some donors may wish to remain anonymous and we wouldn’t want mandatory disclosure to inhibit their generosity. What we’re saying is that individual donors should be declared unless there is a compelling reason not to, and this should be explained by the charity. Donations from companies or other institutional sources should always be declared. Unfortunately, due to a change in the law, companies are becoming less, not more, transparent about disclosing donations to charities in their own financial reports. Charities should be doing the opposite.’