In May 2015, with the first regulated period under the Lobbying Act over and done with, Lord Hodgson of Astley Abbots began his review of the act that has caused so much debate in our sector.

As part of that review, DSC attended a round-table discussion and submitted written evidence. In both we continued to argue that charities should be made exempt from the act. Charities are already prohibited from undertaking activities which seek to influence the outcome of an election and therefore this act is a case of double regulation and is an unnecessary burden on charities.

It has resulted in a chilling effect whereby charities have dampened their campaigning activities out of fear of falling foul of the law. It is necessary for the government to take measures to protect charities right to lobby and campaign for the sake of their beneficiaries.

Click on the title page to read our evidence. 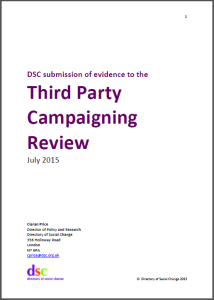