Following on from part 1 of this blog post, where we looked at some common myths about equality and diversity, we delve a bit deeper into the causes of discrimination and how that affects the way we interact with others.

We often think we are immune to stereotyping because we believe that we are not racist, sexist, homophobic etc. However, we are all susceptible to stereotyping and this affects equality and diversity within organisations.

In other words, stereotyping is something we all do on a daily basis. Sometimes it is for our own survival:

A woman walking home late at night, becomes aware of a man walking closely behind her, as she picks up her pace, so does he. She therefore crosses to the other side of the road. The man then walks on and turns into a side street in the opposite direction

Stereotypes are based on previous experience and/or what we are told by other people and the media. It doesn’t necessarily mean they are true; however, they influence our behaviour and this is where it links to equality and diversity. They are usually an exaggerated form of the truth; however, they are not necessarily the reality.

Stereotypes and pre-judging others, is usually about what we see on the surface, otherwise known as the ‘Iceberg Effect.’

The key is recognising when we are making stereotypes and to question whether the decisions and actions we are taking are based on a false reality. 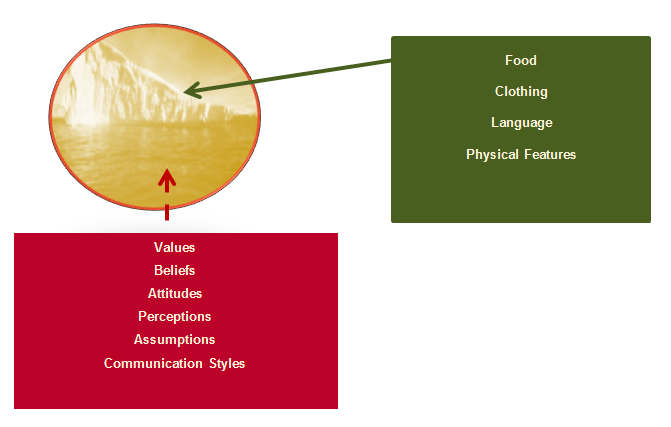 Another area which affects equality and diversity is in-groups and outgroups. During the recent 2016 Olympics we cheer on our own nation (because they wear our recognisable national colours) whilst hoping that the others will lose. We discriminate towards those “on our side”, against the others. We assume that the person is ‘one of us’ depending upon what colours they are wearing –  however, this judgement is based upon a stereotype.

This may be an obvious example of how we ‘discriminate.’ However, at a much deeper level, we have what is known as ‘unconscious bias.’

We like to think we treat everybody the same. However, our brains are hard-wired to use “unconscious bias” and we are drawn to those that are most like us rather than those we perceive as different.

Many years ago, when I worked for the HIV charity Terrence Higgins Trust (THT) I first became aware of this concept. I was at an important international AIDS conference when I suddenly noticed something during the breaks: there were groups of nurses congregated chatting together, with a group of doctors/scientists in another corner and those of us from the ‘charity sector’ were talking about how we might all go out together for dinner in another corner.

We weren’t being deliberately ‘biased’ against or ‘excluding’ others, we were like ‘birds of a feather that flock together.’ We feel safest with those that reflect something about ourselves.

Well, we feel safest with that which feels familiar. Take a look at your friends on Facebook. I’m betting that most of them share similar views, opinions, experiences and other characteristics as you. Again, instinctively unconscious bias is at play: we like and share the posts with which we agree and ignore the rest.

We are prone to “unconscious bias” when we form judgements (at a sub-conscious level, i.e. judgements we are not even aware that we are making).

When I’m on an interview panel and a candidate mentions they, too, are from Wales I’m subconsciously drawn towards them and like them – my “unconscious bias” is having an impact on what I ‘think’ is my subjective decision.

How we interpret others’ behaviour is also informed by previous experience.

If my colleague, Joanna Bloggs, has been dismissive of my ideas in the past, I take this into the present moment. As I present a new idea, my subconscious mind is on the look-out for her finding fault or criticising. I therefore react to any potential signs that she is undermining my ideas and become defensive.

The danger is that I might also dismiss any legitimate concerns about the proposal – thereby only wanting to listen to those who agree with my ‘amazing idea’ whilst ignoring the potential to make my idea an even better one.

So what should we do? Should we feel guilty? Of course not! The first step to valuing diversity is to recognise that respecting difference requires us to question our values, thoughts, feelings and behaviours. This isn’t always easy – it means we have to question ourselves. Many of our organisations’ policies and procedures and our own personal approach to others inadvertently exclude others as “unconscious bias” comes into play, without us being aware of it.

So I hope you will join me at my session at HR Focusfair, to explore what Unconscious Bias means for you and your organisation and how we can all work towards valuing equality and diversity