My dog, a giant Basset Hound called Arthur, is gay. Female dogs are in absolutely no danger of having to go home to their owners and explain sudden weight gain or have a difficult discussion about suing Arthur for puppy support. However, it’s a different story when he meets male dogs: his behaviour around them makes me wonder if we should have sent the feisty young chap to courtship school! 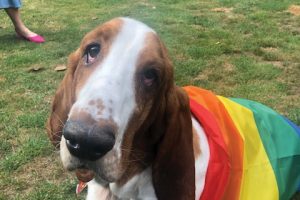 Watching Arthur (left) reminds me of how very natural homosexuality is in nature. It’s rarer than heterosexuality, just as having red hair, like my nephew Sam, is rarer than having black hair. But it is nonetheless obvious that both are natural occurrences.

Arthur’s sexuality was forefront in my mind as I was speaking at Queen’s University Belfast this week on the subject of trust and confidence in charities, and majoring on the value of asking what someone is thinking and observed behaviour.

It is through observing people’s behaviour that I am reminded how completely natural it is for human beings to care about others. No matter how difficult life is for them, many human beings who see someone in need will try to help.

We see this in small ways when refugees share food, or sailors rescue migrants in dinghies, or folk take food around to a recently bereaved neighbour. We see it in the offer of help to people crossing the road or the donation of food to food banks. This compulsion to help others is in evidence all around us.

So ignore negative scare stories about people’s declining trust in charities, either in the media or perpetrated by the Charity Commission. Notwithstanding that the observed behaviour just doesn’t back up those assertions, the reality is that we don’t need to worry about people supporting our causes, because they are driven to help by their very nature.

It is right to keep our own house in order and to be grateful to and respectful of those who help us, but we need to stop jumping through the hoops and loops of this unverified narrative that people distrust and therefore won’t support charities.

Regular readers will know that I am wary of basing policy or decisions on opinion. I’m inclined to trust more what is done than what is said. My ex-husband told me he’d be faithful forever, before running off with a younger blonde. And only two months ago much of the current Cabinet were adamantly against prorogation, yet look where we are now.

Thus I rest my case.

People want to help each other: it’s as natural as Arthur’s sexual preferences and my nephew’s red hair.