Forces in Mind Trust (FiMT) and the Directory of Social Change’s (DSC) report Focus On: Armed Forces Charities’ Education and Employment Provision, reveals that a small number of charities provide a much-needed range of educational and employment services to 35,800 people in the Armed Forces Community. 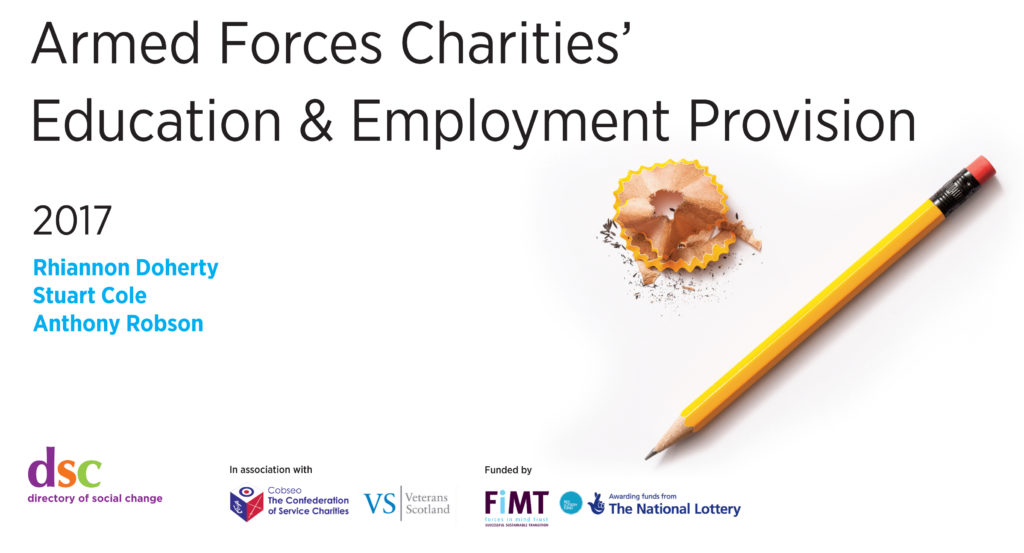 Figures presented in the report illustrate that a large need is being met by a relatively small number of charities. Armed forces charities supported at least 22,302 individuals into employment and helped over 3,300 individuals gain qualifications in the past year, most commonly for veterans and their dependants.

The analysis shows that 78 charities provide education support, which represents 6.5% of all UK armed forces charities. Of these charities, 59 also make provision for employment. In total, armed force charities spend around £25.6m on education and employment, serving at least 35,800 beneficiaries from the armed forces community.

Educational and employment services covered in the report include: vocational courses; academic qualifications; work opportunities; and mentoring such as CV writing and job searches. Direct grants to individuals and organisations are explored, along with partnerships and collaborations between charities and businesses. The report highlights specialist primary provider charities and shows depth of provision, which can have a dramatic and positive effect on an individual’s chance of successful transition to civilian life.

‘The impact that education and employment can have is measured in more than just qualifications or status; increasingly, these areas define our quality of life. We are proud to present an analysis of those charities which support the educational and employment needs of the armed forces community.’

‘FiMT was established to enable ex-Service personnel and their families to make a successful and sustainable transition to civilian life. It does this by funding reports, such as this Focus On series which provides independent, evidence-based knowledge that can be used to influence and bring about change where needed, from policy through to service delivery. The clearly detailed evidence in this report offers an important and unique insight into the education and employment support provided by the Armed Forces charity sector across the UK.’

To find out more about DSC’s armed forces research and search our database of armed forces charities visit www.armedforcescharities.org.uk