Forces in Mind Trust (FiMT) and the Directory of Social Change (DSC) today (25 January) release the report Focus On: Armed Forces Charities’ Physical Health Provision, which reveals that a small number of charities provide a much-needed range of physical health services to a quarter of a million  people in the Armed Forces Community. 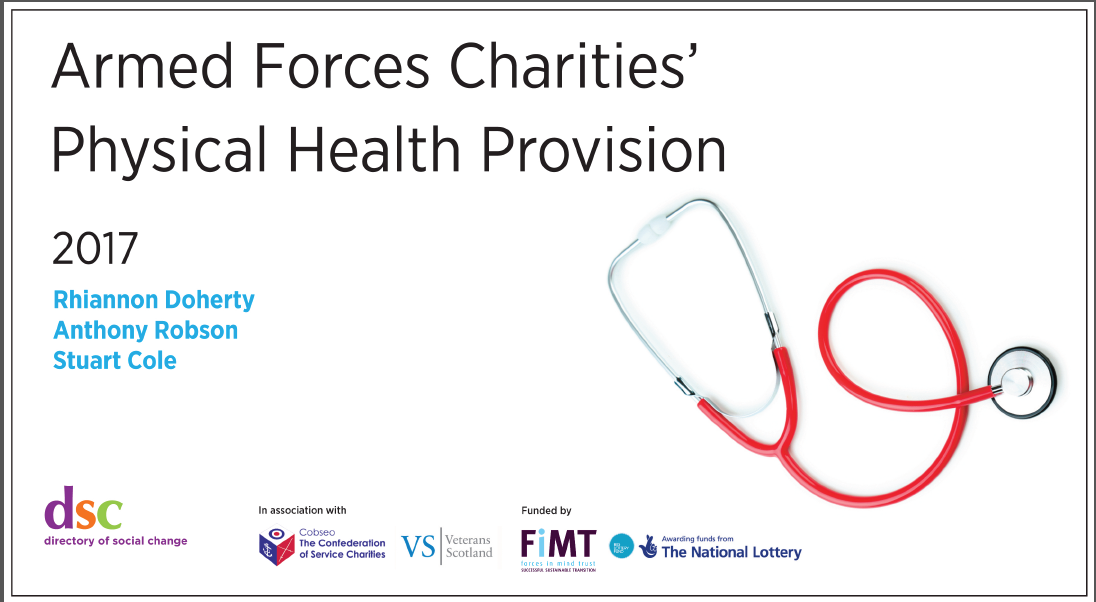 One charity to every 2,070 beneficiaries

Figures presented in the report illustrate that a large need is being met by a relatively small number of charities. Just 121 charities deliver services to at least  250,000 beneficiaries, with, armed force charities spending at least £103 Million on physical health provision within the previous year.

Variety and depth of provision

Analysis shows that many charities provide lifelong support for members of the armed forces community, across a range of specific injury and illness types (not all of which are attributable to Service life), with ‘limited mobility’ being the most commonly supported type of injury/ illness. The most commonly provided services also include recreation-based support, adapted housing provision, and respite services.

The report highlights a range of clinical and non-clinical services, from physiotherapy and nursing to adapted housing and scuba diving. DSC also explore the variety and depth of provision being made by armed forces charities, which can have a dramatic effect on an individual’s recuperation from injury or improved quality of life for an ageing veteran population.

Grant-making practices, best practice, partnerships between charities, and collaboration with other healthcare providers are also explored in DSC’s latest research.

Tom Traynor, Head of Research, Directory of Social Change, says:  ‘The aim of the Focus On series is not only to highlight the vital work our armed forces charities do for their respective beneficiaries, but also to create a better knowledgebase for policymakers and these charities to continue to act in the best interests of our armed forces community.’

Ray Lock CBE, Chief Executive of the Forces in Mind Trust says: ‘By funding reports, such as this Focus On series, evidence-based knowledge can be presented to policy makers and service deliverers to influence and bring about change where needed. This detailed report provides an important insight into the physical health support a relatively small number of charities provide to the Armed Forces Community across the UK.’

To find out more about DSC’s armed forces research and search our database of armed forces charities visit www.armedforcesch