The Charity Commission’s latest bi-annual research on public trust and confidence in charity concludes that there has been a significant drop since 2014, which is out of line with the previous, broadly stable trend. The 2014 survey recorded an average score of 6.7 out of ten. The new research from early 2016 shows this figure has dropped one point to 5.7 out of ten.

Given the spate of negative media stories over the past year, this isn’t surprising. Some charities have clearly fallen well short of the mark in their fundraising practices and this has been exposed. However plenty of the reporting has been jingoistic and even in some cases has intentionally distorted facts or lied outright. Pointing that out isn’t blaming things on the media or dismissing the problem either – it’s just stating a fact. The question is where do we go from here?

The problem with the current debate isn’t the results, it’s the lack of a clear path between the data and an effective policy response. The concepts of ‘trust and confidence’ ‘the charity sector’ and ‘the public’ are vague and theoretical – how do we pin things down into concrete actions that will make a difference? For individual charities, where does it ‘land’ in the real world of conflicting priorities and actual work that needs doing (like fixing the roof?).

I’m not convinced that the volunteer trustee boards of tens of thousands of small charities will be concerned about or even notice these findings. Should they? Does it impact on the trust they have (or don’t have) with their own beneficiaries or local communities? Given that public opinion about well-known charity ‘brands’ has taken a hit, does this open a space for more locally focused, smaller charities to put their message and value across?

The data suggests that trust and confidence increases the more people have an interaction with a charity – for example as a beneficiary of charity services or as a volunteer. This suggests that reality – direct personal interaction – is more important in terms of public trust than generalised perception. Interestingly, the survey results also suggest that the public underestimates how much they benefit from charities. 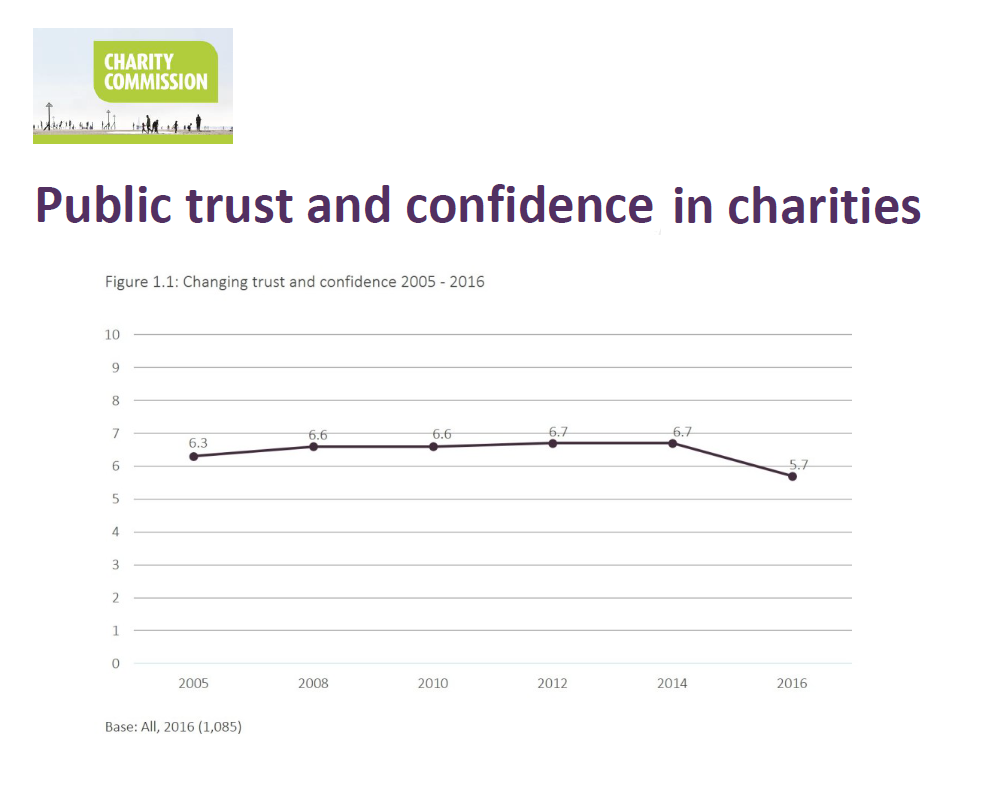 Obviously there has been a regulatory response to the fundraising scandals, in the form of the imminent Fundraising Regulator and hotly debated proposals such as the Fundraising Preference Service. It is an open question as to whether these initiatives will improve matters. There are also diverse moves to put some oomph behind our sector’s response to media criticism – which is much needed. DSC’s effort is the #EverybodyBenefits campaign – we’re highlighting the many (often unrecognised) ways that we all benefit from charities.

The question of how charities collectively can stop being a ‘soft target’ for the media, and make a better case to the public about the huge positive contribution charities make will continue to be discussed and developed. But what else should charities collectively and individually be doing? I certainly don’t have all the answers – but I think these are some other questions we need to be asking:

The conundrum for all three of these key areas is of course resource. Who is going to stump up? Progress won’t happen by magic or osmosis. Umbrella bodies are not drowning in cash or resources and the Commission has had its budget hacked by successive governments which have failed to appreciate the huge social value of its work.

Is there a role for independent funders, corporates or philanthropists to step in? These causes are really important, but not exactly sexy. But without financial support, the amount of progress that can be achieved may not be enough to sway the needle of public trust in the right direction again.

What do you think? Send us your thoughts to policy@dsc.org.uk