ByMalcolm John, author of From Here to Diversity - a practical guide to recruiting Black and Asian charity trustees

‘I’ve read it cover to cover and am looking forward to adopting the advice in our latest round of Trustee recruitment. It’s particularly timely for me, given some recent difficult discussions with one or two Board members who don’t quite get the issues and in fact some of the barriers you’ve listed are word for word some of the comments I’ve come up against.’

‘I just wanted to congratulate you on your magnificent endeavours in producing this excellent report/document [From Here to Diversity]. DWC is actively using your suggestions in our recruitment methods.’

These are some of the ringing endorsements to Action for Trustee Racial Diversity’s new guide – From Here to Diversity: how to recruit Black and Asian charity trustees. This book provides practical advice, guidance and support to charities wishing to increase the racial diversity of their trustee Boards. It’s the first guide that offers specific practical advice and guidance on increasing the racial diversity of charity Boards. The first guide,  which seeks to reduce the extensive scale of informal recruitment- over two-thirds of charities recruit informally – by providing charities with resources to reach and engage Black and Asian networks effectively and affordably.

Reaching and engaging Black and Asian networks and individuals;

Any charity looking to increase its Board’s racial diversity must look beyond its usual networks and informal contacts. However, as the vast majority of charities have predominantly white trustees and senior managers, their access to and knowledge of Black and Asian networks organisations with the capacity and the potential to provide trustees with the required skills and experience is often extremely limited.

That’s why the Guide highlights Action for Trustee Racial Diversity (ATRD)’s work on developing and maintaining its unique database of Black and Asian network organisations. It is a low-cost, affordable tool for charities of all sizes to use, adapt and learn from so that they can increase the racial diversity of their trustee Boards.

The database highlights the rich variety of professional skills and experience, including lived experience, within corporate and other Black and Asian networks and within the very many local network organisations in the major cities and towns in the UK where charities operate. It also identifies a range of universities across the country – virtually all of whom would have Black and Asian student and staff networks from which charities might draw trustees…

The Guide emphasises that the challenge of achieving more racially diverse trustee Boards does not end with recruitment. It extends to charities making sure that, once Black and Asian trustees are  recruited, they remain with the charity for their full term of appointment. This means that charities must develop, maintain and monitor inclusive policies and practices at all levels to ensure that new and existing Black and Asian trustees do not feel excluded or marginalised.

The Challenge to Boards

I launched Action for Trustee Racial Diversity in 2019, with the key aim of addressing the significant under-representation of people from Black and Asian backgrounds on charity trustee Boards.  It only takes 1000 charities recruiting two Black or Asian trustees each of the next five years to turn around the woeful and longstanding 40% underrepresentation of Black and Asian trustees on charity Boards by 2026…  Make your charity one of that 1000.

From Here to Diversity – a practical guide to recruiting Black and Asian charity trustees was created by Action for Trustee Racial Diversity (ATRD), a volunteer-led group founded in 2019 to campaign on increasing racial diversity on charity Boards. It works in partnership with Getting on Board, a charity that helps individuals, employers and members of professional networks become new leaders in communities through board-level volunteering. The guide was written by Malcolm John, the founder of ATRD and a trustee of the Association of Chairs, the support body for charity chairs in England and Wales. Malcolm has previously been a trustee of seven other charities varying in size over the last 20 years. 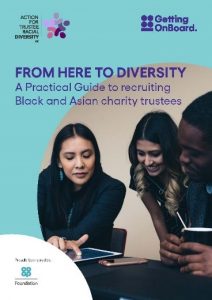 Click here to get your copy of From Here to Diversity.