With my colleagues in =mc consulting, I’ve spent almost 20 years clarifying what the key skills and frameworks are that ensure success in making major donor solicitations. We’ve worked with UNHCR teams in the Gulf to help them secure $350M in a year from Islamic donors, with the Dian Fossey Gorilla Fund to persuade Ted Turner to hand over $1M in 15 minutes, and with Paisley Museum on put together £45M for a rebuild over two years.

So, what’s my secret?

I’m often asked what are the secrets to making your ask effective. To be clear here are secrets – or at least techniques- that are powerful, drawn from psychology and neuroscience. But if you ask me what the single most powerful tool was, I’d say it was to do with what you don’t do. And it comes from ancient China.

An outstanding fundraiser will commit to completely paying attention to the person from whom you’re seeking support. Developing this ability will add significantly to your effectiveness in Making the Ask. We’re combining two techniques here which by chance are not just complementary, but also an anagram of each other – silent and listen:

Create space for the prospect to process their thoughts, take in the information you gave them, and formulate a response. It’s very tempting to keep talking and ‘selling.’ That’s a mistake. You should pause regularly as you share information- waiting for a response. Always pause- remain silent- immediately after you actually make the Ask. Let the prospect make the next move…no matter how long you need to wait. If you have the courage or patience to wait, the prospect will almost always fill the gap with a useful response.

Use the space that your silence offers to listen very carefully – to pay exceptional attention to what the prospect is saying, and what they’re not saying. By focusing on listening, and showing very clearly you are listening, you make the other person feel that they and their opinion are valued. Listening is not just using your ears. It’s also noticing body language and more. The Chinese, with their centuries of wisdom, are of course already on to this.

You may be aware that Chinese ideograms often combine a number of symbols to create a single word or phrase. This makes Chinese an exceptionally rich language. One of the most interesting elements in this context is the cluster of symbols linked together to represent listening. If, like me, you don’t speak Chinese, the listening symbol below is made up of six other ideographic components. These are: You, Eyes, Ear, Heart, Undivided Attention, and King. 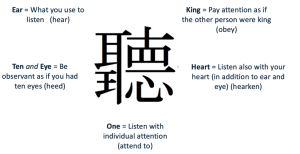 As you can see, this impressive combination goes way beyond what in English is commonly described as active listening.

Let’s explore each of these:

Focus your energy on the act of listening. Make sure you’re not listening just to prepare your answer. When someone else is talking you need to play an active role as the listener for the communication to be effective. If you don’t play your part the rapport may be broken, or part of the message may be confused or lost.

Listen with your eyes. Observe the body language and expressions of the speaker. By paying attention to what the prospect does as they talk, you will pick up so much more about how they feel about what they are saying. You’ll also become more observant and interested in the prospect.

You need to give this to the speaker. Make sure you don’t become distracted by anything else that’s around. Distractions can come from other people when you’re in a group, or even your technology. Switch off your phone! Make this person the focus of all your energy.

Pay attention with your heart. Don’t just consider the prospect as someone capable of making a gift or investment. Be open to their opinions and their beliefs even if they are different from yours. (Provided of course they don’t conflict with core values such as sexism or racism.) Make the time to understand their point of view before responding.

The ideogram is encouraging you to treat the speaker like royalty. Imagine the prospect is the most important person in the world. This involves being courteous, of course, but it goes further: give them the respect and attention such status deserves.

Oddly this is the final part of listening. Take the time to listen to the exact words and phrases being used by the prospect. There may be clues – words or phrasing – about what’s important to them or how they feel about your proposition.

He is also the author of several books, including Making the Ask, Breakthrough for non-profit organisations and The Influential Fundraiser.