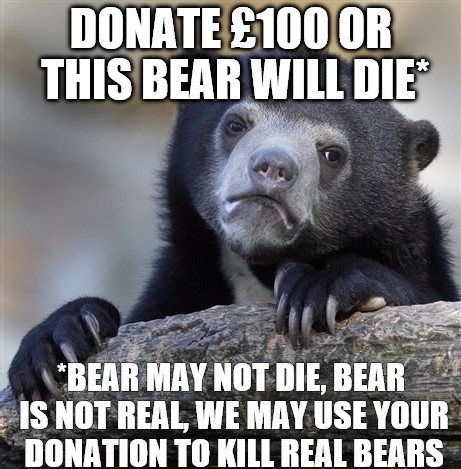 It’s December, and I should probably be suggesting you reflect on another year’s fundraising. Maybe give you “Five Things to Focus On for 2017”, or make a guess at what tricks and trends will emerge from assorted fundraising soothsayers next year. But honestly? There’s not much point.

2016 has been a rough year for fundraisers. And if someone out there is giving out awards for fundraising under-statement of the year, I want it for that. To save us all from a depressing review of the year, in summary 2016 pretty much went:

Government: Hey, we made a bunch of decisions and now a load more people need help from charities. Can you sort that?

Charities: Er, I guess we cou….

Government: Oh, and could you do it without asking the public for money? It’s just it feels a bit icky and some of us don’t like it

Government: Great, thanks. *continues dismantling EVERYTHING*

In a year when politicians have lied, exaggerated and publically misled people in order to win at any cost,  and companies have been openly and routinely caught and let off for rigging markets, exploiting workers and avoiding tax, somehow fundraisers became the bad guys. Charity fundraisers. Just think about that for a minute.

Good. Because I’m furious. Which is helpful, because generally speaking, that’s more productive than being miserable (which might be a line from a Terminator movie, but it’s still true). If you want a lesson from 2016 to apply to your fundraising, I’ll give you one. Be. Effing. Ruthless.

Look at the people, politicians and companies that thrived in 2016. They did it, by and large, by ignoring the rules. If there was a system they couldn’t beat, they ignored it. If there was a line, they worked out the price of crossing it, said “fine, it’s worth it” and ploughed straight through it. If facts got in the way, they made up their own and shouted them until they became the truth for the people they needed to believe them.

As fundraisers, the same systems and people are telling us to do the opposite. Play by the rules. Don’t like those rules? Doesn’t matter, here are even more rules. Here’s the line, don’t you dare cross it. In fact, wait there while we move the line a bit closer and charge you for doing it.

When you’re planning your fundraising activity for 2017, be bold. Be fearless and unapologetic. Be disruptive. Ask questions across your whole organisation about what it would take to see the change you want to make. Not just how much money you’d need, but what you could do to reduce the need if you were absolutely ruthless and determined to succeed at any cost.

So map your stakeholders by all means, but don’t just look at who you need to cajole, befriend and win over for support. Look at who you can hurt – metaphorically speaking obviously. Got an MP in a marginal seat? Get more support than they have and force them to act. Done everything to boost donations from supporters who love you? What could you do to engage people that don’t, given you’ve got little to lose? How could you apply your epic communications skills to build campaign support or mobilise your supporters in a different way?

You might cross the line, but sometimes that’s ok. Sometimes you have to cross the line to know for sure where it is, and to know that you’re not falling short of what you can achieve. Whatever you do, never, EVER let anybody make you feel like asking for money to fix the problem is somehow the problem. The problem is the bloody problem – you didn’t cause it, you’re trying to fix it, and your job, because you’ve decided it is, is to do everything it takes to do that.

Ben is the author of Effective Fundraising, an essential fundraising tool for any charity fundraiser, chief executive and trustee.